What is a Discount Rate?

Definition: The term “discount rate” can be used to mean:

⇨ The rate at which a future cash flow is discounted to determine its present value.

⇨ The Fed discount rate, which is the rate of interest charged by the U.S. Federal Reserve when it lends to banks.

What does Discount Rate mean?

Let’s understand each meaning that the term may have:

Discount rate used for calculating the return on an investment – the current value of a dollar is greater than the value of a dollar received a year later. Let’s consider an example where the interest rate is 10% per year. A dollar today, would be worth $1.10 a year later. It follows that if you discount $1.10 at 10% to the present date, the sum that you would have would be $1.

A discounted cash flow analysis is used to calculate the amount of money that an investor would receive after taking the time value of money into account. The rate of interest at which the future inflows are discounted is called the discount rate.

Fed discount rate – this rate is one of the tools used by the U.S. Federal Reserve to achieve its monetary policy goals. When the Fed raises the rate at which it lends to banks, there is a cascading effect as banks increase lending rates to consumers and businesses. Similarly, a reduction in the Fed rate leads to lower lending rates for end users.

The Fed uses the discount rate to control inflation and to increase or decrease the supply of money in the economy. How does that work? If lending rates are higher, people and businesses will borrow less, leading to a slowdown in economic activity. The opposite will happen when rates are lowered.

Let’s see how a change in Fed rates works. The chart reproduced below provides details of the Fed discount rate for the period from 1950 to 2017: 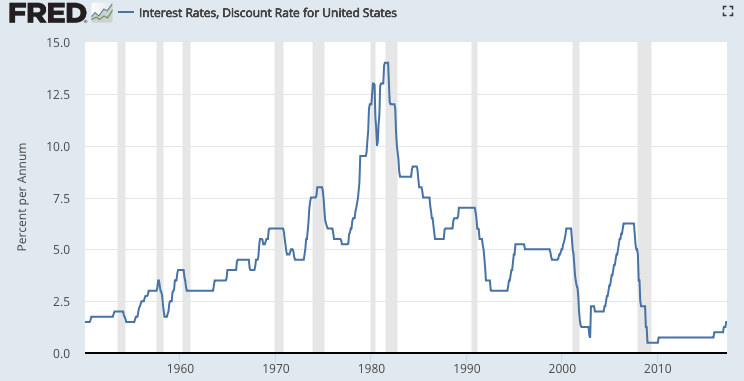 The vertical axis indicates the discount rate. In the mid-1980s, the Fed raised rates to control inflation. You can see that the rates approached a level of 15% at that time. Almost three decades later, rates were dropped to near-zero levels to combat the global financial crisis of 2008 and to help the country out of recession.

Bryce Welker is a CPA and regular contributor to Forbes, Inc.com, and Business Insider. After graduating from San Diego State University he went on to earn his Certified Public Accountant license and created CrushTheCPAexam.com to share his knowledge and experience to help other accountants become CPAs too.